The department’s inspector general delayed looking into a retaliation complaint by a former intelligence chief until after the 2020 election, according to officials and a whistle-blower. 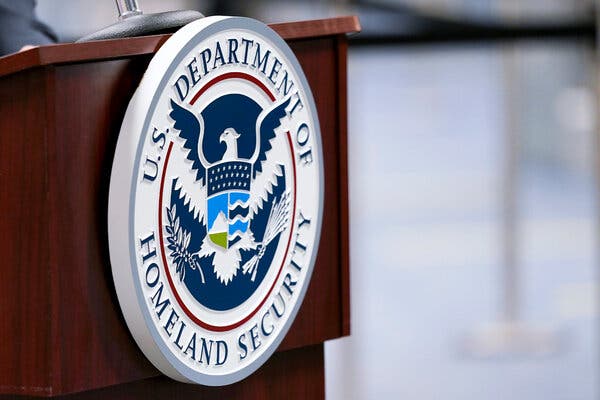 During his confirmation hearing in 2019 as the department’s inspector general, Joseph V. Cuffari assured senators that there would be no retaliation against whistle-blowers on his watch.Credit…Lynne Sladky/Associated Press

By Zolan Kanno-Youngs and Eileen Sullivan

The Department of Homeland Security’s inspector general blocked an inquiry into whether senior agency officials demoted an employee who criticized the Trump administration, according to people familiar with the matter and a whistle-blower complaint obtained by The New York Times.

The inspector general, Joseph V. Cuffari, ignored recommendations from his investigators and delayed the inquiry until after the 2020 election, according to officials familiar with the matter and a whistle-blower complaint filed in April.

At issue was whether Brian Murphy, a former intelligence chief at the department, was demoted by its leadership last summer for warning his superiors and Mr. Cuffari’s office that the Trump administration had deliberately withheld reports about the rising threat of domestic extremism — a warning that proved prescient after the Capitol riot on Jan. 6 — and Russia’s attempts to influence the election.

Mr. Murphy filed his own complaint about his reassignment in September. But Mr. Cuffari and his aides delayed looking into his claims for weeks last fall and limited the time investigators had to conduct interviews, according to people familiar with the matter and the separate April complaint, filed by Brian Volsky, a former senior investigator in Mr. Cuffari’s office.

Mr. Volsky’s complaint, dated April 27, was first obtained by the Project on Government Oversight, an independent watchdog group in Washington. The organization brought the information to The Times, which confirmed its authenticity with four government officials familiar with the matter. The details add to mounting questions, particularly from lawmakers, about the impartiality of the office conducting oversight of an agency that was at the center of some of former President Donald J. Trump’s more contentious policies, including deploying federal agents to protests in American cities and separating migrant children from their parents at the southwestern border.

Mr. Murphy was reassigned in August, after he included the tweets of journalists — including a New York Times reporter — in intelligence reports during the unrest in Portland, Ore., last summer.

In his complaint last September, Mr. Murphy said he was demoted because he had raised concerns with his superiors and the inspector general on multiple occasions — from March 2018 to August 2020 — that the Trump administration had distorted intelligence to align with the president’s political priorities. Chad F. Wolf, the acting homeland security secretary at the time, and his top aides have repeatedly denied that claim. The investigation into Mr. Murphy’s claims is continuing, according to Mark Zaid, his lawyer. 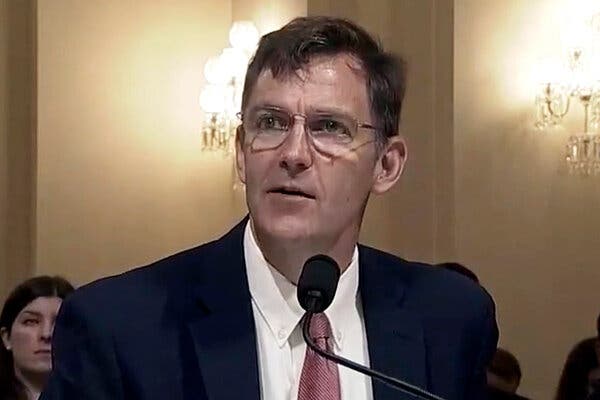 Brian Murphy claimed he had been demoted for warning his superiors and Mr. Cuffari’s office that the Trump administration had deliberately withheld intelligence reports about the rising threat of domestic extremism.Credit…C-SPAN

Mr. Cuffari’s office responded to questions about the allegations with a statement that “we do not publicly discuss whether, or what, whistle-blower retaliation investigations are pending.” The office is pursuing investigations into how intelligence was gathered before Jan. 6, the statement said.

The allegations, if they prove true, could add to what has already become a dilemma for President Biden: how to handle inspectors general who were appointed by the Trump administration and remain on the job. Mr. Biden has the ability to remove some agency watchdogs, but he has prioritized restoring government norms and the independence of oversight institutions that many in his administration felt were under attack during Mr. Trump’s tenure.

“On one hand, the administration wants to avoid the politicization of the inspectors general and generally would want to allow them to continue to conduct their work independently,” said Carrie Cordero, a senior fellow at the Center for a New American Security. “On the other hand, the administration has a responsibility to ensure the inspectors general’s offices are operating effectively and appropriately.”

Lawmakers are also working to shore up the independence of agency watchdogs after Mr. Trump fired or demoted a number of them last year, claiming he was treated unfairly.

But precisely what Congress can steer into law remains unclear. The Democratic-led House on Tuesday approved several changes to mandate that an inspector general can be removed only for cause, to require the president to notify Congress when that happens and to limit whom the president can select to temporarily replace an ousted watchdog without the Senate’s approval.

Mr. Cuffari, who spent 20 years working in the Justice Department’s Office of the Inspector General, assured senators during his confirmation hearing in 2019 that there would be no retaliation against whistle-blowers on his watch.

Mr. Volsky filed his complaint to the Council of the Inspectors General on Integrity and Efficiency, which reviews allegations of misconduct by inspectors general. In it, he accused Mr. Cuffari and two other employees of “conduct that undermines the independence or integrity reasonably expected” of their positions.

Mr. Volsky’s complaint did not specifically name Mr. Murphy, but three people familiar with the matter confirmed that it was referring to the office’s handling of Mr. Murphy’s retaliation case.

In the complaint, Mr. Volsky said he was told that Mr. Cuffari had decided not to look into Mr. Murphy’s claims because of a conflict.

By then, he wrote, the team “had lost several weeks of investigation time and had roughly two months before it would lose the ability to compel many of the key witnesses in the investigation.”

But even then, investigators faced roadblocks, according to Mr. Volsky’s complaint and a separate batch of emails obtained by The Times.

Mr. Cuffari and his top aides rejected their requests to spend two hours interviewing witnesses, instead limiting the queries to one hour, according to the emails and the Volsky complaint. As late as January, the team continued to press for interviews with senior officials at the agency, fearing that they would not be able to conduct them before the presidential transition, according to the emails.

Investigators in the office were ultimately able to conduct the interviews, although some were forced to conduct them via written questions given the limited amount of time, according to the emails.

The criticism of Mr. Cuffari outlined in Mr. Volsky’s complaint supports a recent review of the Department of Homeland Security’s Office of Inspector General, which found that dysfunction has spanned several administrations, with high turnover rates among the staff, multiple reorganizations and little adherence to management structures.

The office has long been plagued by controversies. In the spring of 2020, a former acting inspector general and a former information technology manager were federally indicted on charges of stealing the office’s databases.